Hibernian made it 18 games undefeated this season, as they defeated Hamilton Academical at the Hope CBD Stadium 4-2.

A brace from Abi Harrison, a goal from Cailin Michie, along with an own goal made it 16 wins out of 18 this season for the Edinburgh side.

The Hibees travelled to Lanarkshire, full of confidence after that emphatic 11-0 SSE Scottish Cup win against Edinburgh University Hutchison Vale, with a title chance within sight.

They came up against a Hamilton side fighting for survival at the foot of the table, who are in the similar position to the Hibees – every point, and every goal is vital for their respective seasons.

The game proved very much a clear case of an unmovable object, coming up against an unstoppable force; despite the wealth of possession and array of attacking prowess from the Hibees, the Hamilton defensive organisation ensured that the difference between the two sides was just the two goals.

Hibernian made a very fast start, putting pressure on the Accies backline from the first whistle. Within the first minute, Lisa Robertson drove through the Hamilton defence, and whipped in a cross, which nearly played Shannon McGregor in, however was cleared by a confident Lauren Grant in the Hamilton goals.

Grant was put under pressure again, as Jamie-Lee Napier pulled a shot out the bag from outside the box, which looked like it was curling into the top corner, before Grant tipped it behind for a corner.

Hibs mounted considerable pressure on the hosts, with Napier terrorising the wings, and Robertson and Reilly providing much driving power going through the middle. The Hibees made the breakthrough in the 13th minute, after Reilly’s shot was blocked Harrison jumped on the ricochet and stroked the ball low and to the keeper’s left.

Despite Hibs laying on the pressure, the lead only lasted five minutes. On Hamilton’s first outing into the Hibernian half, they forced a corner, which was delivered by Rice and headed home by Rachel Ross.

Hibernian responded by laying on the pressure yet again. Napier came close, with a stinging shot deflected out for a corner. The lead was back with Hibernian by the 24-minute mark however, after Emma Brownlie delivered the ball into the box, and found Michie who managed to knock the ball into the back of the net.

Hibernian looked like they meant business, with a drive to keep on scoring. Napier demonstrated exceptional skill, cutting in from the left wing, and slicing the ball towards the bottom corner, forcing Grant into another top save to deny the Edinburgh side.

On the 29 minute mark, we saw the first of two spectacular Shannon McGregor moments within two minutes of each other, as she attempted a volley which would have been a goal of the season contender, going just over.

Just a minute later, Michie crossed the ball, playing Napier in, who floated the ball to McGregor, who came agonisingly close to pulling off a glorious overhead kick, as the ball rattled off the post.

Hibs were enjoying all the possession, with the home side’s sole venture into the Hibernian half being on the occasion they scored. The Hamilton defence however was holding very strong, forcing their opponents to shoot from distance, and the game rolled into half time, with the score sitting at 2-1 to the visiting side.

The second half kicked off, and it took Hibs just three minutes to boost the scoreline to 3-1.

Lisa Robertson drove the ball into Hamilton defense, but a botched clearance from Hamilton, coming off another Accies defender forced the ball into the back of the net.

Hibs continued the pressure, but despite shipping three goals by this point, the Accies looked powerful, and hard to break down.

Hamilton reduced the lead to 3-2 in the 64th minute, with Lori Gardner finding herself in the Hibs area, and showing great attacking skill by taking the ball round Fife, and putting the ball into the back of the net.

The next twenty minutes played out like the bulk of the game – Hibs utterly dominant in possession, with lots of shots, but most from outside the box.

Hibernian finally found goal number four in the 85th minute, as Napier burst down the left wing, and flashed the ball across goal, and found Harrison, who made no mistake in converting for goal her 20th of the season. 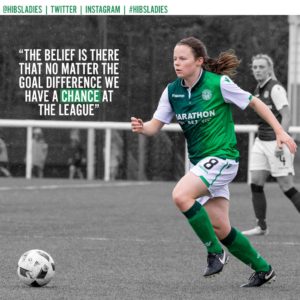 Player of the Match

Thoughts From The Camp

Cailin Michie: “We created a lot of chances. We definitely could have been more clinical. We had a lot of shots off target, that could have tested the keeper more, but we dominated the possession – the goals we lost, we were caught on the break for one of them, and another one was just from a corner. But we came away with the 3 points, so that’s all we can really hope for.

“Hamilton managed to flood the area well, and forced a lot of our shots long range, so that maybe contributed to us having so many shots off target. Regardless, you’d want more of them on target, and testing the keeper. They were all so close, and over the top of the bar, so it got quite frustrating.

“My goal came from a great cross from Emma (Brownlie). The defender missed it, and I was able to hit it off the keeper. It took a bit of a rebound, but I’m happy to have been involved in getting the goal.

“However, we’re very conscious that we’ve drawn twice this season to Glasgow City. We do believe we can get a win against them, but it would have eased the pressure if we could match them on goal difference, but I think after today that’s possibly out of the picture, unless we can score an incredible amount of goals in the next few games. The belief is there that we can beat them, and not worry about goal difference.”

Head Coach, Grant Scott: “Tough game. I think we made it tough on ourselves if I’m being honest. Credit goes to Hamilton for the way they set-up, but I thought we were wasteful with the football today, and caused our own problems by letting them get a couple of opportunity, but we’re delighted to win, but it’s tarnished, because I don’t think we did so well.

“We set out to keep clean sheets for sure, so conceding goals is frustrating, especially with the goal difference aspect, which has been spoken quite a lot outside, but it’s points that are going to win the league if it comes to that, and we’d rather that. We’re just focusing on winning our games.

“Hamilton are in a relegation fight, and it was a team at the top of the league against a team at the bottom – we spoke a lot about that during the week, and the evidence was there today – they fought for every ball, and they defended resolutely – it was really difficult to break them down. We can look at ourselves, and say we could have done better, but credit goes to them for the defensive display they put in. They looked a bit dangerous on the break when we game them those opportunities, so fair play to them for taking their chances.

“The biggest positive for us today is that it was a win – we’ve said that to the players. A win’s a win at this stage. We spoke at the team meeting this week about winning the two matches before the break. Difficult away fixture today, a difficult away fixture next week, and to come away with any kind of win is a real positive for us, so from that respect, we’re delighted with the win.”