City safely through to the SSE Scottish Cup Semi-Finals

Glasgow City stormed to the semi-finals of the SSE Scottish Cup with an 11-0 win over Renfrew at New Western Park.

It was always going be a tough task for the Division 1 side, who sit two levels below City in the Scottish Women’s League set up and it got even tougher when Hayley Lauder fired City ahead in the first half. Lidija Kuliš then headed home twice, before Lauder also netted her second on 37 minutes and Kirsty Howat made it 5-0 before the break.

In the second half, further goals came from Howat, Jordan McLintock, Lara Ivanuša, Hannah Stewart (2) and Jo Love to finish off the comfortable victory. 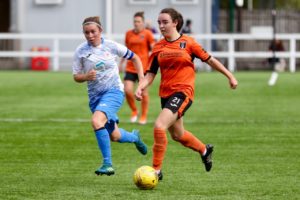 Commenting, City boss Scott Booth said, “It is great to get through to the semi-finals of the Scottish Cup especially considering the amount of games and what has been at stake for us in recent weeks.

The players have really stayed focused and determined to win matches, but at the same time, perform well. I thought we created some fantastic opportunities for ourselves today and I have got to be happy with the overall performance and result.”

The draw for the semi-finals takes place at BBC studios on Tuesday.

Next up for City is Rangers at home at Petershill next Sunday at 2pm, before the Scottish Champions welcome Somatio Barcelona of Cyprus for the 2nd leg of the last 32 of the UEFA Women’s Champions League on Thursday 27th September. Tickets for that match are on sale now at glasgowcityfc.co.uk and are priced £10 Adult, £5 U16s.