It’s the 3rd Round of the SSE Scottish Women’s Cup this Sunday with six ties taking place. With Glasgow City in UWCL action, their match against Stirling University has been postponed until the 22nd of August and Hibernian progress to the next round after Dundee United were unable to field a team. 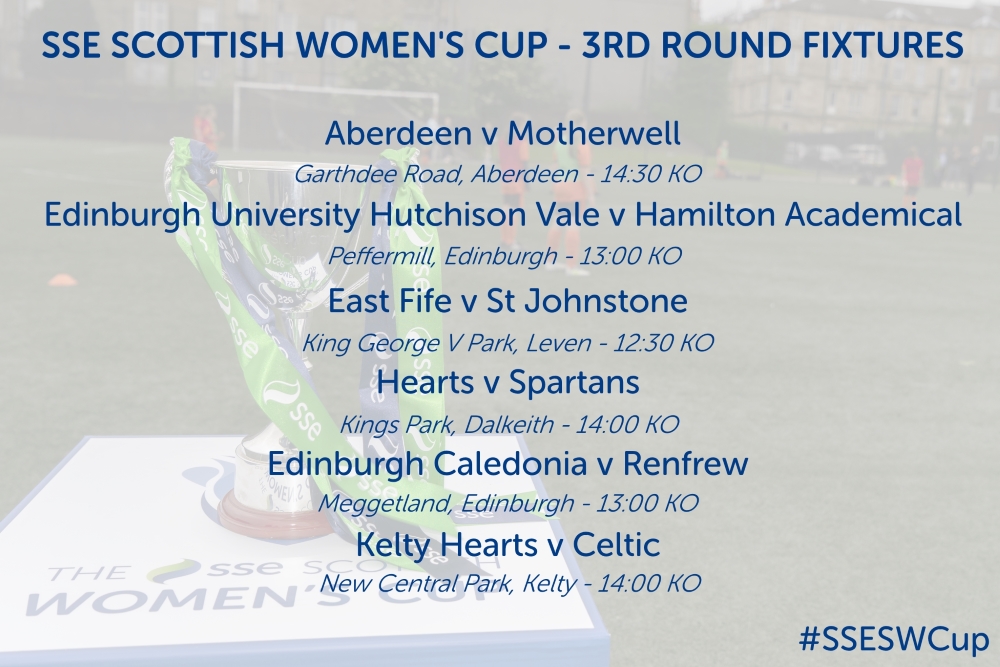 Two SWPL 2 sides meet in the last 16 of the Scottish Cup, with what could potentially be a fiesty encounter. In the last league meeting between these sides, it ended 1-1 with Motherwell having three players sent-off.

Aberdeen know that Motherwell will be favourites. Motherwell won 6-0 at home earlier in the season and The Dons are second bottom in SWPL 2, seven points from safety with seven games remaining. However, they will have hoped to have turned the corner since returning from the Summer break. They picked up a 0-1 win over Hearts last Sunday, ending a nine game run without a win.

In contrast, Motherwell are in fine form with only one loss and one draw all season. They’ve also scored 60 goals in the process. With a 13 point advantage over second in the league with seven games remaining, Motherwell can perhaps focus at putting a cup run together. If they do though, they’ll be without Eddie Wolecki Black who will become Celtic Head Coach before the next round.

Both teams entered in the last round, with Aberdeen having a walkover and Motherwell defeating Cumbernauld Colts 8-1.

This is one of two games featuring an SWPL 2 side against an SWPL 1 side. Edinburgh University Hutchison Vale (EUHV) come into this match as one of the most inform teams in the league. They’re unbeaten in six of their last seven games, winning four. They’re also unbeaten at home in the league, so they’ll be full of confidence coming into this match.

Hamilton Academical came away with an important point last Sunday against relegation rivals, Spartans. They’re still only a point above the relegation spot, but it means they control their destiny. While putting a run together in the cup will be a bonus, especially after a hard fought win over Rangers, the main prioirity will be avoiding the drop. As favourites of this match though, they’ll hope to come out on top.

Both teams entered in the last round, with EUHV beating Hawick 7-0. Hamilton Academical had a tougher game, drawing 1-1 with Rangers after 90 minutes. Accies progressed eventually, 3-1 after extra-time.

SWFL Division One North side, East Fife, have one of the better draws in the last 16 of the competition. While they will still be underdogs, it was only 2017 when East Fife were an SWPL 2 side. During that season, they narrlowly lost 2-3 to St Johnstone (known as Jeanfield Swifts). A lot has changed since then, but East Fife are unbeaten in the league and could well bounce back to SWPL 2 next season. This will be a test of their ability.

St Johnstone know this wasn’t the easiest draw possible as well, but they’ll still be favourites. They’re third in SWPL 2, having returned from the Summer break with a strong performance at home to Motherwell. They also defeated East Fife in all three league games in 2017 and they are arguably a stronger side now than last season.

East Fife have been involved since the start of the competition, getting a home draw in each round. They had a walkover in the Preliminary round but went on to defeat Boroughmuir Thistle 5-0 in Round 1 and Westerlands 2-1 in Round 2. St Johnstone entered at the last round, defeating another SWFL Division One North side, Dunfermline, 3-6.

The second match of the round which pits SWPL 2 against SWPL 1 comes in the form of an Edinburgh Derby.

Hearts, sixth in SWPL 2, come into the match after a disappointing defeat on Sunday. They lost 0-1 to Aberdeen, who were bottom of the table going into the match. While it’s only the first game back, it does mean that Hearts are now the team above the relegation zone. As underdogs with home advantage, they’ve nothing lose though in this match.

Spartans have had a Summer of change with Debbi McCulloch coming in as Head Coach until the end of the season. While their 0-0 draw with Hamilton on Sunday wasn’t a terrible result, it keeps them bottom of the table with seven games to go. While avoiding relegation will be a priority, Spartans may see this as an opportunity to build up some much needed confidence.

Both teams entered in the last round, with Hearts putting in an impressive 1-5 win over fellow SWPL 2 side, Glasgow Girls. Spartans had a long journey North to face Inverness City, also coming away 1-5 victors.

It’s an all SWFL tie, meaning at least one SWFL team will reach the last eight of the SSE Scottish Women’s Cup.

SWFL Division Two East side, Edinburgh Caledonia, are one of only two SWFL Division Two sides left. While they are the underdogs in this match against SWFL Divison One opposition, they provided a shock in the previous round by beating Queens Park, 6-4. Both Renfrew and Queens Park play in the same league and are on the same points, so Edinburgh Caledonia may fancy creating another cup shock on Sunday.

Renfrew though will be hoping to make their superior league status tell. They also know the pressure of being favourites after narrowly defeating SWFL Division Two opposition, United Glasgow, in Round 1. They’ll hope to use that experience gained and get to the next round of the competition.

Both Renfrew and Edinburgh Caledonia have played in every round of the SSE Scottish Women’s Cup. Edinburgh Caledonia defeated Montrose, 2-1, after extra-time in the Preliminary Round, beat Murieston United 0-5 in the 1st Round, and then saw off Queens Park 6-4 in the last round. Renfrew defeated Bonnyrigg Rose 13-0 in the Preliminary Round, were narrow 3-2 winners over United Glasgow in Round One, and were impressive 0-12 victors over Dee Ladies in the last round.

Similar to Dundee United, Kelty Hearts couldn’t have picked a much harder game for this round of the competition. However, they have home advantage and they have already won a cup competition this season in the form of the SWFL Division Two Cup. They’ve also only lost one game this whole season, a 3-2 defeat away to Dundee City on the 24th of June.

Celtic will be strong favourites for this game as currently the third strongest team in Scotland. They also have relatively good form in cup competitions, reaching the final of the SWPL Cup in the last two seasons. They were knocked out at the 3rd Round of this competition last season but by the eventual winners, Hibernian. They’ll be hoping to go at least one better this year and impress ahead of the arrival of their new Head Coach, Eddie Wolecki Black.

Both teams entered at the last stage of the competition with Kelty Hearts receiving byes through the Preliminary and 1st Round. They defeated Dundee City, 1-4, the last round. Celtic had a walkover in the last round.