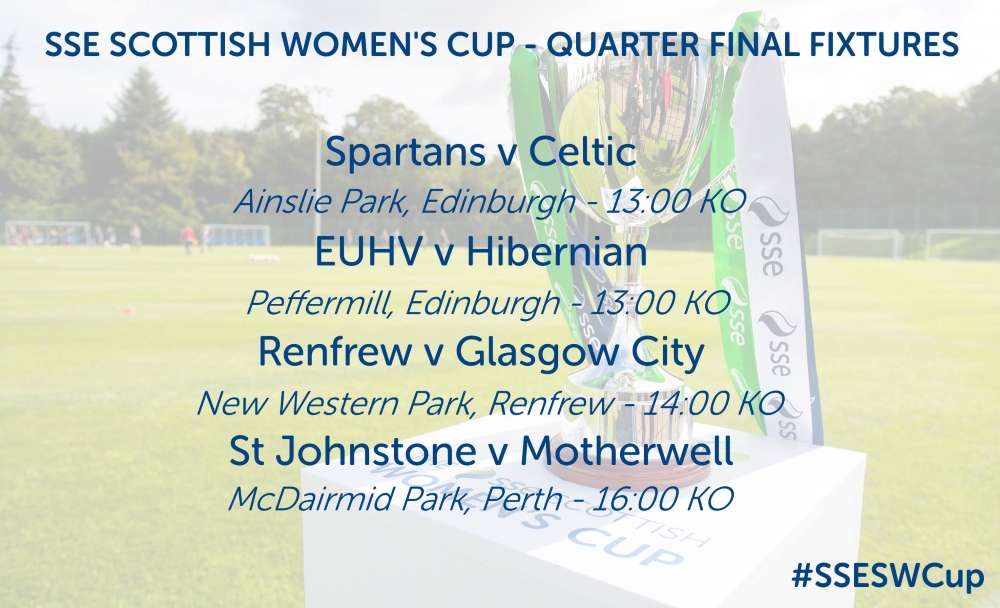 It’s an all SWPL 1 tie as seventh placed Spartans host third placed Celtic for a spot in the final four.

Spartans reached the last eight after two tricky away matches. In the 2nd Round, they travelled to take on SWFL Division One North and former SWPL team, Inverness City, coming away 1-5 winners. They were then drawn an Edinburgh derby, away to SWPL 2 side, Heart of Midlothian. It was a tougher match, but the Ainslie Park side were comfortable 0-3 victors.

Celtic have only played in the previous round, coming away comprehensive 0-11 winners against SWFL Division Two East side, Kelty Hearts. Since that game, the team are under new management with Eddie Wolecki Black in post as Head Coach. This will be only his second match in charge after a 0-0 draw last Sunday with Rangers.

These sides have met twice so far in 2018, with Celtic winning the last encounter on Sunday 9th May, 0-5 at Ainslie Park. The other previous meeting was on Sunday 18th of March where it finished 0-0 at K-Park.

It’s another all Edinburgh match in the SSE Scottish Women’s Cup, with holders Hibernian making the short journey to Peffermill.

Edinburgh University Hutchison Vale (EUHV) were comfortable 7-0 winners over Hawick United in Round 2 and they pulled off the shock of Round 3, beating SWPL 1 side, Hamilton Academical 2-1. While it was a surprise result, EUHV were unbeaten at home at that point. Since then, they’ve not won in their last three home league matches losing to both Hearts and Motherwell.

Hibernian were comfortable 0-7 winners over SWFL Division One South side, Thistle Weir, in Round 2 and reached this stage after Dundee United were unable to field a side in the previous round. This will be their hardest match to date but they’ll be strong favourites as they try and win the competition for a third year-in-a-row.

Renfrew are the only Scottish Women’s Football League side left in the competition and the only side to have featured in every round. They started their campaign back on April 29th, winning 13-0 over Bonnyrigg Rose in the Preliminary Round. They then narrowly defeated United Glasgow, 3-2, in the 1st Round before another comprehensive 0-12 win in the 2nd Round over Dee Ladies. In the previous round, it was a close match as they eventually beat Edinburgh Caledonia, 1-2.

Glasgow City have faced SWPL 1 opposition in their previous two matches. In the 2nd Round, they defeated Forfar Farmington, 0-3, and then saw off Stirling University, 5-0. This will be seen as a much easier test for the SWPL champions but they have just returned from Cyprus after their Champions League success.

The final SSE Scottish Women’s Cup match is between St Johnstone and Motherwell, both SWPL 2 sides.

St Johnstone have had two tough matches to this point, though against lower league opposition. In the 2nd Round, they defeated Dunfermline Athletic 3-6 and then were 2-3 winners over SWFL Division One North side, East Fife.

Motherwell have been on fire in this competition, scoring 16 goals in the two games. Their first win was an 8-1 victory over Cumbernauld Colts in Round 2 before an 1-8 hammering over fellow SWPL 2 side, Aberdeen.