Celtic denied Forfar Farmington a share of the spoils, emerging 4-3 winners despite being pegged back twice and seeing out a nervy end to the game.

The visitors were a goal to the good after only one minute through trialist Suzanne Mulvey, with a Sarah Ewens brace and Josephine Giard effort enough to claim all three points.

Celtic enjoyed a dream start after Suzanne Mulvey bundled the ball over the line from close range in the bright start for Celtic. The Hoops looked to capitalise on their early advantage, but it was Forfar who found net next, through an unstoppable effort from just outside the area by Cheryl Kilcoyne on the 23rd.

The Hoops only took six minutes to restore their lead with a perfectly placed and timed Ewens volley from inside the box giving Celtic control of the match again.

But Forfar again worked their way back into the match and drew things level again only three minutes into the second half, Danni McGinley picking up on a pass through the backline to slot past the onrushing Megan Cunningham.

With the score level, both teams shown their intent on getting on top, carving out chances and testing each other, but it was Celtic who drew blood next, again through Ewens on the 68th, who calmly slotted home after linking with Giard in the box. Giard then got in on the act herself, extending their lead to four with her drive with ten to go.

Forfar were determined to have one final say though, with Beth Shillitto knocking it over the line in a goalmouth stramash following a delivery from the freekick only two minutes after Giard’s effort, but the Hoops held out to maintain their winning run, ahead of the visit of Hibs next week. 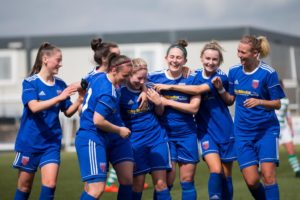 Forfar Farmington lost out to the odd goal in seven in a thrilling game that saw Celtic take all three points from Station Park on Sunday.

Cheryl Kilcoyne’s phenomenal strike along with goals from Danni McGinley and Beth Shillitto were not enough as Stevie Baxter’s side were harshly denied anything from the game.

They got off to the worst possible start just 79 seconds after kick off when Keeva Keenan forced her way into the box allowing Celtic trialist Suzanne Mulvey to fire home.

This didn’t deter Farmington however and they settled into the game quickly; Megan Robb sent a lob over Megan Cunningham but it was cleared by a defender.

Sarah Ewens blasted over for the visitors in the fifth minute and two minutes later at the other end Beth McPherson was inches away from connecting with Cassie Cowper’s cross, this wasn’t cleared and Rebecca Dempster sent her shot into the arms of the keeper.

Emma Black failed to find the target from the edge of the box as Celtic looked to extend their lead, however in the 23rd minute Farmington were back on level terms with what could be the goal of the season.

A botched Celtic clearance spun up into the air and Dempster nodded the ball to Kilcoyne who took a touch before sending a fantastic strike into the top corner from 30 yards.

Rachael O’Neill and Kelly Clark had opportunities for the visitors following this but they weren’t to be denied in the 29th minute as Ewens powerfully volleyed into the roof of the net.

Farmington weren’t to let their heads drop after going behind for the second time and had chances of their own as Donna Paterson headed wide from Nicola Davidson’s free kick.

Danni McGinley saw her shot deflected wide in the 35th minute but the final chance of the half fell to Celtic as McNicoll saved a Josephine Giard shot before Chloe Craig headed wide from the corner.

It was Farmington’s turn to score shortly after kick off as three minutes into the second half Cowper played the ball to McGinley and she rolled her marker before stroking past Cunningham.

Sarah Ewens was involved heavily for Celtic as they looked to take the lead for the third time; setting up Natalie Ross who fired over before being denied by Fiona McNicoll on three occasions.

Celtic sub Claire Crosbie and Farmington’s Erin Cattanach both sent efforts over the bar in quick succession but after 68 minutes the visitors regained the lead when Forfar failed to clear their lines as Sarah Ewens stabbed home her second of the afternoon.

Paterson saw her long range free kick held by Cunningham before McPherson came inches away from connecting with a Cowper cross as a deflection took it away from her and out for a corner.

The lead was extended with ten minutes remaining as Giard capitalised on some fortunate rebounding of the ball to slot past McNicoll.

Farmington reduced the deficit to one goal again two minutes later; Davidson’s free kick into the box causing problems for Celtic and sub Beth Shillitto rifled through a pack of players.

They were unable to find a fourth goal to take a deserved point from the game but the side and Stevie Baxter can be pleased with the reaction given following the previous week’s heavy defeat.