More girls in the UK are being encouraged into football thanks to a positive shift in attitude amongst parents, says new research conducted by SSE.

The first ‘SSE Girls Sport Participation survey’, reveals that younger parents in particular are leading the way in promoting the beautiful game to their daughters.

Exploring parental attitudes to sport and football as well as participation and encouragement, the survey shows UK mums and dads are increasingly enthusiastic about their daughters playing football, going to see a professional match or even enjoying a career in the sport.

A recurring theme was the role that younger parents, those aged 40 and under, already play and suggests a new generation of mums and dads can lead the way in driving the future participation of girls in football.

Among the key findings are:

Being part of a team and increased physical fitness are the benefits for girls of playing football most cited by parents (both 78%).

Dads are generally happier than Mums for their daughters to pursue playing, coaching or administration careers in football, with younger parents more comfortable than older peers.

Younger Mums are most likely to disagree that ‘Football is a sport for boys’.

Age 5-7 is the sweet spot for girls to take up football. 53% of girls currently playing football first started at this age.

The survey was commissioned by SSE, the energy behind women’s football, who currently sponsor the SSE Women’s FA Cup and SSE Scottish Women’s Cup as well as delivering Girls’ Participation Programmes in both England and Scotland.

Donald Gillies, Head of Girls’ and Women’s Football at the Scottish FA, said: “We greatly welcome the findings of this research as it corroborates and expands on the direction of development we are taking the girls’ and women’s game in Scotland along with our partners at SSE.

“We aim to speak to parents to tell them how welcoming and nurturing football can be for their daughters and that it can provide an environment that will benefit them for a lifetime.” 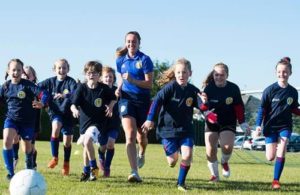