Glasgow City recorded their first away leg knockout win in the UEFA Women’s Champions League since 2011 after two goals from Hayley Lauder and Leanne Crichton ensured an important win for Scott Booth’s side over Somatio Barcelona of Cyprus, with the return leg only two weeks away.

City started on the front foot and got off to the perfect start when Lauder diverted home Abbi Grant’s cross after only three minutes. Grant, named Scottish Building Society Player of the Month for August before kick off, showed her great form throughout the ninety minutes and was a thorn in the hosts side for the majority of the match.

Somatio came back into the match and City had to defend well, but always looked the more dangerous and had a Kirsty Howat goal harshly ruled offside and hit the woodwork twice before Leanne Crichton popped up with a bullet header in the closing minutes to give a two goal cushion ahead of the return leg at Petershill Park.

For the second leg, both teams will have to play without their captains, as Rita Akkafou for the hosts was sent packing for two yellows and City’s Leanne Ross, booked for a challenge, then was shown a second yellow minutes later for taking a free kick before the referees whistle. It was a very harsh booking for Ross and she will be a big miss for the home side for the return leg.

Commenting on the match, City Head Coach Scott Booth said, “The team was incredibly professional in what was an extremely competitive game. At times I felt the opposition was over zealous in their challenges but our players kept their composure well. It is a fantastic result away from home in the Champions League however we all know that is it just half the job done.”

The return leg will take place on Thursday 27th September at Petershill Park, Glasgow. Tickets are currently on sale and priced £10 adults and £5 U16s and can be purchased via www.glasgowcityfc.co.uk 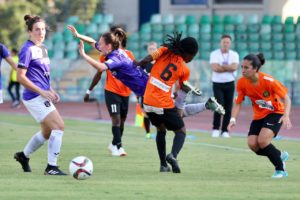