Brave schoolgirl footballer Katie Pake who lost most of her leg to cancer is determined to save lives.

The 10-year-old defender for Raith Rovers Ladies and Girls Football Club was reunited with her team mates after beating cancer. Katie, who endured surgery to help her walk again, also met Raith Rovers stars Iain Davidson and Kyle Benedictus during a special visit to the Kirkcaldy club. And Katie has set her sights on a new goal- becoming match fit so she can get back on the pitch for good.

Doctors, who removed the middle section of Katie’s right leg, reattached her foot and ankle to her thigh back to front to create a new knee joint. This made it easier for Katie to wear a prosthetic limb.  Now Katie- who only went through the operation known as rotationplasty in February this year- has been chosen to help launch Stand Up To Cancer in Scotland. The joint fundraising campaign from Cancer Research UK and Channel 4, backed by stars including Davina McCall, Edith Bowman, Alan Carr, Joel Dommett and Kirsty Allsopp aims to raise money to fund vital research which will get new and better treatments to cancer patients faster.

Katie from Coaltown of Balgonie, said: “I want to Stand Up To Cancer to help everyone who is in hospital at the moment with cancer.

“I love sport and was really sad when I couldn’t play football after I got cancer. It feels so great to come back today to see everyone and has made me even more determined to work hard so I can get back in to all the sports I love. I don’t mind when people look at my foot. I want to show that cancer has not stopped me.”

Now to support her, Katie’s football pals are wearing bright orange- the colour of the Stand Up To Cancer campaign – to raise awareness and encourage Scots to sign up for a free fundraising pack. This year, there are lots of different ways to get involved and help raise vital funds, including getting sponsored to wear orange at school, work or with friends. 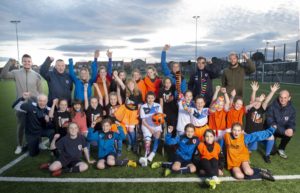 Raith Rovers Girls team coach, Christian Murray said: “We’re proud to swap our team colour and show our support for Stand Up To Cancer by dressing up in orange in honour of Katie. It’s a fun and easy way to get involved and support a really important campaign. We want to help tackle cancer head on. That’s why we hope our fans will show their incredible fighting spirit and get behind this amazing cause.”

And what a difference a year makes. When football fan Katie Pake who also loves swimming was diagnosed with osteosarcoma in her right shin on June 16 2017 her parents, Carol and Grant Pake were devastated. They’d first taken Katie to the GP after Katie developed a painful knee which was stopping her from doing the sports she loved. But nothing could prepare the family including Katie’s brother Cameron, 17, for test results at the Royal Hospital for Sick Children in Edinburgh which showed Katie had bone cancer. Osteosarcoma is the most common type of bone cancer in UK children. Around 35 children are diagnosed with the disease each year in the UK.*

“Katie on the other hand was pragmatic, asking for her treatment plan. Katie didn’t want to be told anything but the truth. She was an inspiration and despite the cancer refused to give up.”

Katie started chemotherapy treatment in July 2017 and was scheduled to have surgery in September with medics hopeful at first that they could remove the cancer but save her leg. But it was a hammerblow when more tests that the cancer had also spread to her spine and hips. Katie started a new intense chemotherapy treatment and it was a huge relief just before Christmas when tests showed the cancer had gone from her spine and hips.

On February 9 this year, just two days before her 10th birthday, Katie endured an eight hour rotationplasty operation to remove the cancer from her leg. Katie was the first patient to have the surgery at the children’s hospital in Edinburgh. Ahead of the operation, caring Katie asked for the words, “Please recycle” to be written on the section of leg which was going to be removed- telling the doctors she wanted the tissue to be donated to medical research to help other people with cancer.

Mum Carol said: “Katie was so brave on the day of the operation but those eight hours were the worst of our lives.

“We were completely out of control and didn’t know what to do with ourselves. After the operation Katie woke up in extreme pain but was determined to start the rehabilitation process the very next day. She smiled all the way through getting better. Despite feeling awful a lot of the time, she made the doctors, nurses and other professionals laugh. She kept saying there were other children worse off than her.”

Katie endured further chemotherapy, fighting flu as well as other infections during recovery in hospital. She completed treatment at the end of March and the family were delighted to receive the news that there was no sign of cancer. Katie was finally fitted with her first prosthetic leg in August this year. The artificial lower limb was attached to the knee joint created by her foot. Now Katie is having physiotherapy three times a week to get active again. She’s back at school, swims two times a week with the Carnegie Club in Dunfermline to resume competitive swimming. Katie is building her strength  and is getting on well with the use of a wheelchair and walking frame.

Mum Carol said: “Katie wants to be a champion for all children affected by cancer.

“We are truly proud to call Katie our daughter. She wants to swim, play football, skydive, represent Scotland in the Paralympics and maybe one day even become a surgeon. And most of all she wants to make a difference. She really is our hero and we’re so proud to Stand Up To Cancer with her.”

Since it was launched in the UK in 2012, Stand Up To Cancer has raised more than £38 million to help turn breakthroughs in the lab into brand new tests and treatments for cancer patients.

Lisa Adams, Cancer Research UK’s spokeswoman in Scotland, said: “We’d like to thank Katie, her family and Raith Rovers for their colourful support. We hope their transformation will inspire men, women and children from across Scotland to get sponsored to wear orange or find their own fun way to help raise money.

“By supporting Stand Up To Cancer, they’ll be helping to fund game-changing research to transform the lives of cancer patients and their families.

“Every hour, four people are diagnosed with cancer in Scotland.** It’s time to blow the whistle on cancer and get payback for all those affected. By supporting Stand Up To Cancer, people in Scotland can help to ensure that one day, no-one’s life will be cut short by this devastating disease.”

Cancer Research UK is urging people in Scotland to get started right now and sign up for their free fundraising pack. As well as getting sponsored to wear orange for the day, it includes a host of creative ideas to help beat cancer sooner.

People across the country can also show their support for the campaign in style as a fun range of clothing and accessories for men, women and children is available now, online, and in Cancer Research UK shops from late September.

This autumn Channel 4 will once again bring the brightest stars from show business together in a dedicated season of Stand Up To Cancer programming, culminating with an unforgettable night of live television on Friday, October 26.

To get involved visit standuptocancer.org.uk