Celtic strolled to a 4-0 victory and the top of the table during the opening weekend of the Scottish Women’s Premier League 1, putting in a performance where manager Eddie Wolecki Black “couldn’t ask for much more”.

Natalie Ross dazzled in the opening day fixture against Forfar Farmington clinching a brace and assist, with free-scoring Celtic impressing ahead of a run of three away games. Three first-half goals from Sarah Ewens, Josephine Giard and Natalie Ross put the hosts in cruise control before a second-half strike from Ross cemented the result.

It only took three minutes for Celtic to undo Farmington. The hosts came out firing from the off with Ewens netting from close range after the long throw from Keeva Keenan.

The second came ten minutes later with Giard picking up Ross’ through ball to round the keeper and double the lead. The ruthless Celts worked a third goal on the 39th, after great link-up play from Keenan and Kat Smart out wide allowing Ewens to turn provider for Ross to volley and force it in off the crossbar. 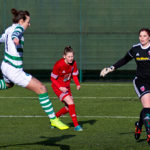 Despite holding a 3-0 advantage at the break, the Celts were in an unforgiving mood and  started the second period with a torrent of attacks.

As the pressure mounted in the 51st minute, Ross completed her double with a silky piece of skill and a classy finish to put Farmington to the sword. Kodie Hay’s constant pressure down the left allowed her to cut through the Forfar defence, immediately returning the pass from Ross, who wriggled passed defenders with a Cruyff turn in the packed box to dispatch her shot in the top right corner. Farmington almost pulled one back just two minutes later, but Kelly Clark was on hand to foil the Forfar counter-attack.

Wolecki Black used the opportunity to utilise all five subs ahead of next week’s tricky meeting with Hibs in Edinburgh, and introduced Crosbie, O’Neill, Cairney, McCulloch and McGovern into the mix. Celtic were on the hunt for a fifth, but had to be content with four to seal the three points and head to the top of the table.

Celtic now travel to Ainslie Park in Edinburgh on Sunday, 17 February, to face Hibs in a 1pm kick-off.

Player of the Match: Natalie Ross