A late winner for the home side gave them the win today, although Raith headed home having deserved at least a point after a fantastic comeback.

This was Raith’s first trip to Dunfermline’s new home in Rosyth. With a strong west wind, the tight pitch and an exposed west side gave both teams a challenge to try and keep the ball in play.

An extra challenge in the initial period was torrential rain, and just when the heavens had well and truly opened, the home side managed to break through twice in 2 minutes to go ahead 2-0. 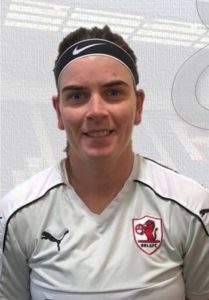 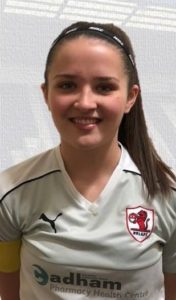 However, Raith began to dominate the midfield and Penman pulled one back with a divine turn and shot which looped over the keeper, so 2-1 at half time.

The poor weather had cleared for the second half and with the wind dropping this gave both teams the chance to play better football.

A sublime move between McLachlan and Carter after 55 minutes gave the latter an opening in the box and she made no mistake with her finish to get a deserved equaliser.

Smith in goal and Clark at centre half were solid for Raith, while the visitors continued to press looking for the winner. However the home defence was tight and there were few chances of any note from either side.

Unfortunately for Raith the winner came after 80 minutes, the home striker somehow finding a way through the defence to score.

Raith never gave up though, and tried everything to get back up field again but were hampered by a vicious rainstorm which plagued the players and spectators for the last 10 minutes, with the wind whipping up so strong, spectators had to be vigilant with any small children and dogs in case they ended up blown away.

So a defeat for Raith, but this was also yet another game where the score in the reverse fixture was an improvement from the first half of the season, a sign that the team are learning every week and consolidating in division one.

Credit today to Isla Beveridge and Alana Ward from our u17s who helped out today and both played well – Isla making her division one debut, while Alana had her first ever senior game – well done girls!

Next game is next Sunday against Inverness City at Stark’s Park.