FC Edinburgh have lifted the Championship and League One cup after winning a tense penalty shootout 5-4 against holders Dryburgh Athletic.

It was a cagey 120 minutes in Alloa which saw both midfields successfully disrupt the rhythm of their opponent, although FC Edinburgh had last gasp chances at both the end of the regulation time and in the last kick of extra time.

Dryburgh midfielder Hannah Innes, on loan from SWPL club Aberdeen, picked up the player of the match award for preventing FC Edinburgh dominating the midfield in a way that they have done all season on league duty, but it was the Edinburgh side who would carve out an early chance.

After only three minutes, a wicked ball was sent across the box by Jayden Simmons but FC Edinburgh captain Danielle Forsyth missed her swipe at it with the linesman’s flag staying down.

The ball was moving quickly, and at the other end, a good breakaway by Alma Codegoni was followed by a neat pass to Derrian Gollan, but she needed an extra touch, allowing defender Alix Wilkinson to intervene and make it safe.

At 20 minutes a silky one-two fed in FC Edinburgh top scorer Emma Mitchell, but the ball rebounded off a defender and into Dryburgh keeper Chantelle McKay’s hands. Eight minutes later, Wilkinson floated a free kick straight into McKay’s hands, but FC Edinburgh were starting to impose themselves on the game and set the tempo.

At the other end, Gollan fed in Megan Robb on the left, but FC Edinburgh keeper Schenai Gamrot held onto the shot in her near top corner.

The rest of the first half saw a tempestuous midfield battle, with Dryburgh’s Kiah Innes seeing yellow for a robust collision with Forsyth that saw the Edinburgh skipper requiring treatment and limping off at half time.

At times a talismanic figure of the capital club, Forsyth came out for the second period but was clearly in some discomfort and was quickly replaced by former Hibs teammate Nicole Rutherford after only two minutes. 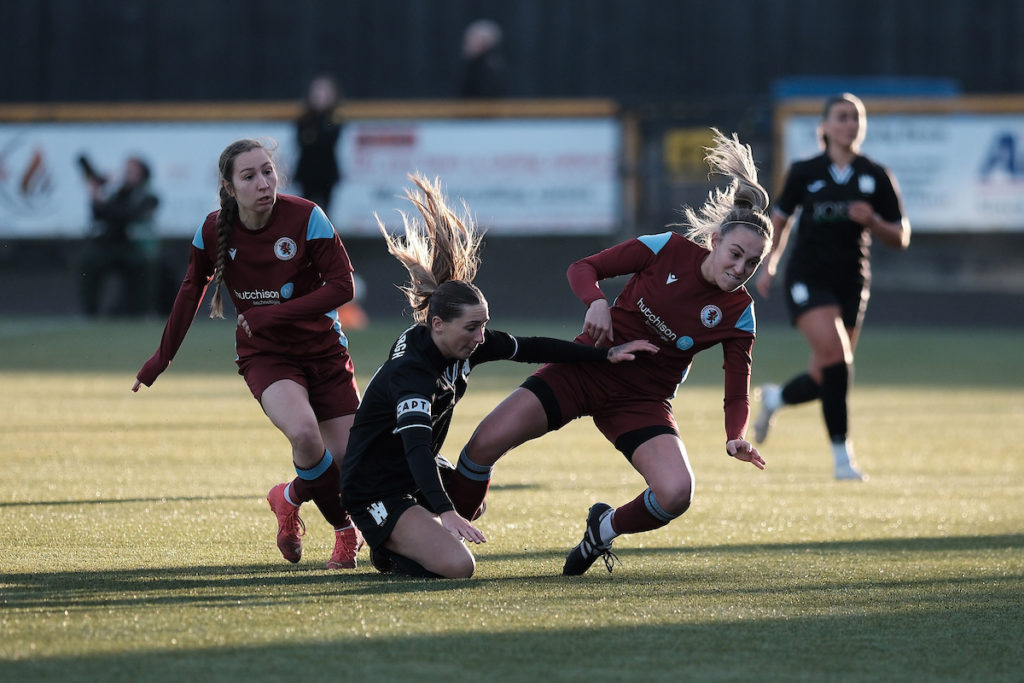 Left back Niamh Fellenger was outpaced by Codegoni a couple of times and was replaced by the experienced defender Ash Clark.

Dryburgh, too, were forced to change things with 16 to go, with Mel Gormley who had frustrated Edinburgh on their left picking up a knock and being replaced by Katie Hasset.

With FC Edinburgh shading possession for the first 80 minutes, Dryburgh began to impose themselves, with Zoe Moreland showing some good composure in the middle of the park and Megan Robb and Codegoni causing problems out wide.

But Hannah Markley saw a shot go inches wide after Jayden Simmons had used her pace to win a corner, then a free kick from Dryburgh by Hannah Innes was just too high and too fast for Robb at the back post to reach it.

FC Edinburgh almost grabbed an injury time winner through Deborah McLeod as she met an inswinging corner, but it agonisingly cleared the crossbar and the game would head into extra time.

It was the capital club who kept up the momentum into the additional time, using the ball well and capitalising on some tired Dryburgh legs. But Hannah Innes almost caught Gamrot off guard with an impressive shot from almost 40 yards out which just dipped too late and shaved the crossbar.

Louise Vaughn was left head in hands as she saw her shot at the back post in the final minutes go just wide of the upright, then a stramash saw McKay pull off an incredible point-blank save before a header came back off the bar and the game would be decided by a penalty shootout.

McKay also pulled off a sublime save in the shootout but it wasn’t to be for Dryburgh, and the League One leaders would go on to win their first silverware.