Charlie Wellings’ two-minute double in extra time proved to be the difference as Celtic secure a hard-fought 2-0 victory against a resilient Hearts side to book their place in the Biffa Scottish Woman’s Cup Final at Tynecastle.

It all went to plan for Celtic, eventually. Celtic found themselves prodding and probing at a stingy Hearts defence who held the hoops out until late into extra-time when PFA Player of the Year nominee, Charlie Wellings converted two chances in two minutes to take the game away from the girls in maroon.

Celtic dominated in the first-half however found themselves facing a keeper at the top of her game in Charlotte Parker-Smith. Parker-Smith was called upon to make 3 crucial one-on-one stops from a Celtic team that had threatened her goal from the very first minute of the match.

Wellings finally opened the scoring for Celtic early in the second period of injury-time after getting onto the end of a cutback from Mengyu Shen. Wellings’ half-volley found its way into the goal leaving Hearts hero, Parker-Smith a spectator as the ball rolled into her bottom corner.

Only moments later the ball broke across the box after a deflected cross found its way to Wellings once more, leaving her with plenty of time and space to slide the ball under the Hearts’ keeper securing the place for her side in the final.

Eva Olid’s girls’ will leave with their heads held high as they forced Celtic to dig deep in order to find a breakthrough in the game, however, it will be Fran Alonso and his side going forward to Tynecastle to May 29th. 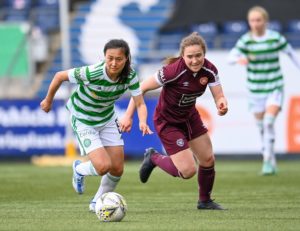 PFA Player of the Year, Priscilla Chinchilla shined once again as Glasgow City put in a professional display to dispatch of a feisty Partick Thistle side that sees the holders move on to the final of the Biffa Scottish Woman’s Cup.

Glasgow City took the lead early in the game from a corner kick when a deflected effort found it’s way into Lee Alexander’s net.

Partick however, were not down for long as they replied to going one behind almost immediately with a corner of their own. A floated ball towards the back post found Cheryl McCulloch who had rose highest in the swarm of bodies and powerfully nodded the ball past Lee Alexander at her near post.

A third set piece goal of the game came shortly after that as Partick struggled to clear another Glasgow City corner. This time the ball fell to Scotland International, Lauren Davidson who coolly dispatched the ball past the keeper to give City a 2-1 advantage.

It wasn’t until late into the second half when Glasgow City wrapped up the victory. A well-executed counterattack found substitute Ode Fulutudilu in behind the Partick backline where she spotted the supporting run of her teammate Priscilla Chinchilla who she calmly squared it to at the back post to tap the ball into an empty net.

An all-Glasgow affair awaits in the capital on May 29th as Glasgow City find themselves matched up against Celtic in the final – a repeat of the 2021 SWPL Cup final which saw Celtic emerge as winners. 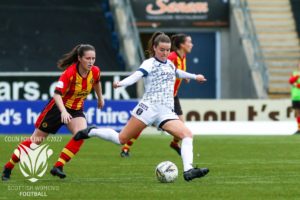