The suspension of football by the Scottish FA will be lifted from Monday 24 August in line with the update provided by the First Minister yesterday to phase three of the Scottish Government’s route map out of the COVID-19 crisis.

In practical terms, this means that contact training for the youth and adult game – including professional and non-professional – can resume from Monday morning in line with updated government guidelines.

The details were outlined today to Scottish Championship, League One and League Two clubs in a series of videoconference calls hosted by the Joint Response Group. Further meetings are scheduled for tiers 5 and 6 of the Scottish football pyramid early next week.

Guidance has also been issued by the JRG Grassroots Sub Group throughout the recreational game in conjunction with sportscotland and the Scottish FA’s Return to Football Hub has been updated to reflect the most recent advice.

Rod Petrie, Joint Response Group Chair: “This is a significant and hugely positive step forward for the whole of Scottish football and means that training can resume for both the professional and grassroots game from Monday.

“I understand the sacrifices players, coaches and clubs have been forced to make to get to this point but the health of the nation remains our absolute priority. Through the JRG and its grassroots sub group we have worked hard since yesterday’s announcement from the First Minister to put the latest government advice into context for the professional and non-professional game and to make the message as clear and as simple as possible.

“Training can resume on Monday in line with government’s ongoing social distancing measures and advice and, if the virus continues to be contained in Scotland, then the path to competitive football matches being played by October is tangible.

“We must continue to be vigilant and respect the guidance and protocols that are in place but on the JRG calls with Championship, League One and League Two today you could sense the anticipation to get football back and I know from my board colleague, Thomas McKeown, that the announcement has been met with similar excitement across the grassroots game.”

Thomas McKeown, Scottish FA Board Director and Chair of the JRG Grassroots Sub Group: “We are pleased to move into the next phase of our routemap to the Return to Football, and the resumption of contact training and small-sided games within clubs at both adult and youth football is an extremely positive step forward.

“We wholly appreciate how keen everyone is to return fully to the game by restarting leagues and match activity but we also appreciate everyone’s patience and understanding as we move at the pace that we hope will ensure that as many people return to the game as possible by creating a welcoming, fun and most importantly, safe environment for all.”

The news comes in light of the First Minister announcing that Scottish football grounds could be opened up to fans from September 14, with restricted numbers and physical distancing measures in place. Discussions are already well under way to prepare for the Return to Supporting phase and Scottish Premiership clubs are currently producing documentation that will facilitate the gradual return to supporters within the configurations of each of the 12 stadia, including access and egress, logistics and health and safety protocols.

Neil Doncaster, SPFL Chief Executive: “This is a major milestone in getting our game fully up and running again. It’s hard to overstate the significance of this development for clubs outwith the Premiership, which can now start preparing with confidence for the Betfred Cup on 6 October.

“The next crucial step will be allowing Scottish football fans back into games, based on the comprehensive range of safety measures which have been developed by clubs in close consultation with health experts.

“Discussions on pilot events at Premiership matches are now under way and everyone is determined, for the sake of the Scottish game as a whole, to ensure these go smoothly and safely.” 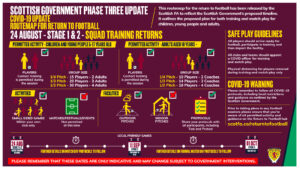