Motherwell’s development side had keeper Eilidh Hegarty to thank as they lifted the SWFL plate after a tense penalty shootout separated the sides at Broadwood.

The final would prove to be a nervy affair at Broadwood stadium, with East Fife’s development side enjoying the bulk of possession, especially in the second half of regulation time, but both sides lacking a cutting edge in front of goal for 120 minutes and it was up to Hegarty to bring home the silverware.

The nerves were on show in the opening exchanges, with both sides snatching at shots on either side of a tense midfield battle. Motherwell shaded possession in the first ten minutes but lacked the composure to make it count. On three minutes Kay Walker sclaffed a shot wide in three minutes after a neat sidewise ball from captain Samantha McManus played her on. A minute later she produced a looping shot which only narrowly cleared the bar. Natasha Roberts won a free kick around 20 yards out but she cut it well wide.

It would be East Fife who would have the first shot on target after ten minutes, lively winger Chloe Laing shot from distance at the keeper’s near post but she dealt with it comfortably. But it spurred the Fifers into action, and they enjoyed a more productive spell. On 17 minutes captain Lucy Bryant blasted over when she had time to take a touch.

On 22 minutes Motherwell had the ball in the net from a corner, but the linesman’s flag was up with two Well players offside when the ball was flicked on.

But despite the best efforts of Mothwerwell’s midfield backbone of Natasha Roberts and Rachael Brennan-Lynch, East Fife were growing into the game, pushing Motherwell into their own half and catching counters out with the offside trap. Both Courtney Porter and Laing whipped in shots from either side which went narrowly past the uprights.

Motherwell stopper Eilidh Hegarty did well to keep out Bryant on 43 minutes, after East Fife’s captain had broken through and clipped a shot high and to her left, and the game was goalless at half time.

East Fife started the second half in the same vein, Laing again pulling a shot just wide. Five minutes in and some good pressure from Porter won East Fife a corner but the wind carried the ball behind.

The East Fife supporters were on their feet at 57 minutes after a clever lay off from player manager Pauline Harley had given Bryant a clear run at goal, but she saw her wicked shot clip the bar with Hegarty well beaten. Harley herself had an opportunity minutes later from inside the box, but Motherwell defender Kate McManus proved too strong for her and she didn’t get the chance to get a clear strike away.

Bryant and Porter would shoot straight at the keeper before a rare attack from Motherwell on 66 minutes required bravery from East Fife keeper Holly Bonellie to dive at the feet of the onrushing Samantha McManus.

Kirsty Calderwood also looked dangerous at points for the claret and amber, but throughout the second half centre backs Rebecca McAdam and Kerry Forsyth kept the Motherwell attackers quiet.

Extra time was scrappy, as Motherwell fought their way back into contention. Kay Walker was tripped just outside the corner of the box but the East Fife wall held strong from the free kick. Then in the final minute, East Fife’s Terri Morrison was taken out near the halfway line. The free kick was floated in and the keeper spilled the ball but Lisa Fitzpatrick hooked the ball high over the bar over her left shoulder.

East Fife were left to rue the missed opportunities as Hegarty rose to the occasion between the sticks. 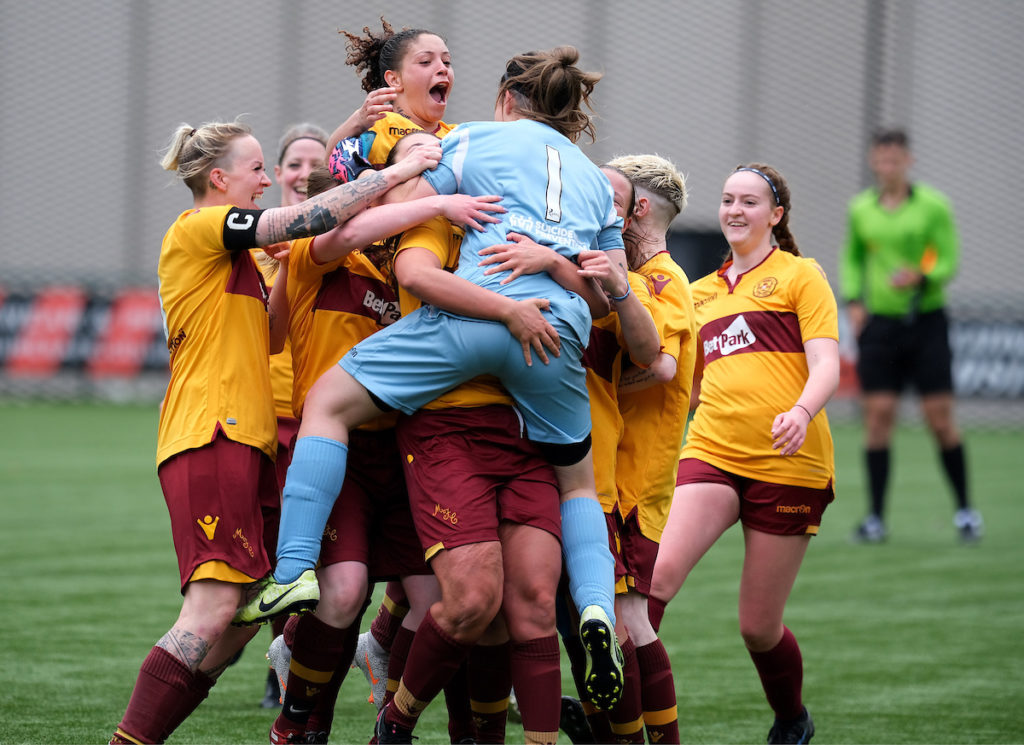