The great and the good of women’s football in Scotland were celebrated in a glittering awards ceremony and dinner in the Hilton Glasgow.

Hosted by broadcaster Jane Dougall, the evening saw recognition for unbeaten league campaigns from Rangers, Montrose and Bishopton, as well as honouring the stand taken by McDermid Ladies in refusing to accept poor decisions by their former club.

The 2021/2022 season was a historic one for women’s football in Scotland, and the event marked the first time such a ceremony could be held in person since the disruption of the pandemic.

“It is fantastic to be able to get together again in person and celebrate everything women’s football has to offer and to honour those who have played a special role in making history this season,” SWF chair Viv Maclaren told nominees.

She continued: “Women’s football has fantastic role models, is open to all, and creates a unique matchday experience, and that’s what we are celebrating tonight.

“But while we celebrate the growth in the game, we must also be determined. Because there is still far to go on our journey when it comes to representation on football’s big decision-making bodies and respect and parity for our game.”

After dinner entertainment was provided by the fabulous comedian Susie McCabe.

The first winner was Mhari Lindsay, who picked up the Sunday Post Volunteer of the Year for her tireless work at Cumnock Juniors. The award was presented by Scottish Football legend Rose Reilly, who made her name playing for Italy in the 1980s. 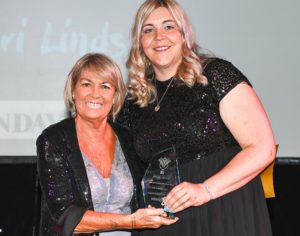 Volunteer of the Year Mhari Lindsay with Rose Reilly

Bishopton won Avia Signs SWFL Team of the Year, with their coach Nori Fian also picking up SWFL Coach of the Year.

MG ALBA International Player of the Year was awarded to Erin Cuthbert after her league and cup double with Chelsea.

In a video sent from her holidays in Spain, Cuthbert said the award “means a lot to me and my family after a difficult year”.

Rangers under-16 starlet Mia McAulay was named SportScotland Youth Player of the Year, while Youth Coach of the Year went to Ross Stormonth of Rangers U19s.

Possibly the biggest cheer of the night happened when Millennium club of Stranraer won the Youth Team of the Year, with host Jane Dougall saying: “Despite significant geographical challenges, Millennium have provided opportunities to local girls to not only participate, but also win. They exemplify the best aspects of the grassroots game.” Both awards were sponsored by alcohol campaigners SHAAP. 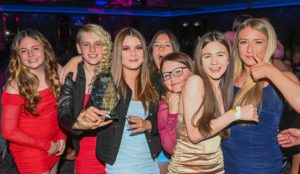 Millenium Club of Stranraer were Youth Team of the Year

The Kat Lindner Award for Outstanding Athletic and Academic Achievement, named after the former Glasgow City player who died suddenly in 2019, was handed to Leanne Crichton of Motherwell for excelling both on and off the pitch. Crichton, who had played with Lindner, said her former teammate was dedicated, honest and humble and that is she was honoured to receive this award.

Rangers picked up SWPL Team of the Year, sponsored by the premiership’s new league body the SPFL, and SWPL Coach of the Year for Malky Thomson.

Finally, a video from bestselling crime author Val McDermid announced the final award of the night, the Val McDermid Spirit of SWF award.

“There’s only one possible candidate for this inaugural presentation of this award, and that is [McDermid Ladies Captain] Tyler Rattray. She has been a captain to be proud of, a leader. She’s been brave and steadfast,” she said.

She added: “Tyler has shown that how the skills you learn on the field, of leadership, of solidarity and bravery can map onto your lives as well. I think all the women involved in McDermid Ladies have shown real staunch support for each other through all of this, and that’s what we need going forward – a kind of solidarity and sisterhood that helps us support the women’s game and also support the fight against violence against women and girls.”

In accepting her award, Rattray invited the whole McDermid Ladies team onto the stage, displaying the same solidarity.