Livingston and FC Edinburgh have boosted their promotion bids with convincing victories at the top of the Women’s Championship and Women’s League One respectively.

Goals from Livingston’s Anderson and Mulligan either side of a brace from Jennifer Dodds saw the West Lothian side beat Ayr United 4-1 at home in the Championship, while Renfrew Ladies took advantage of Rossvale’s game being postponed to move into second in the table after a seven goal thriller against Inverness Caley Thistle. Goals from Brown, Macleod, Munro and Wilkie secured victory, with a double from Inverness’ Hossack and a goal from Mackenzie in reply from the highlanders.

Hutchison Vale moved back into the top half of the Championship with a convincing 4-0 victory over Morton, which included goals from Zoe Evans and Gabby Anderson adding to a brace from captain Angyl Learmonth.

Deborah McLeod and Nic Rutherford will have had to compete for the match ball, after both grabbing hattricks for FC Edinburgh in their 10-0 demolition of Dundee West. Emma Mitchell grabbed a double with further goals from Hannah Markley and Louise Vaughan. The cup winners stretched their lead at the top of League One after second-placed Westdyke and third-placed Westdyke played out an entertaining draw in Aberdeen. 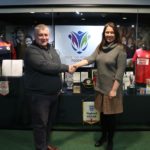